Road safety in a tornado 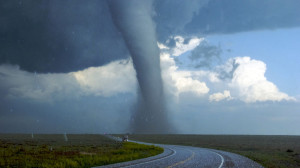 In 1991, video footage went viral (as viral as video could be in 1991) of people taking shelter from a tornado by leaving their cars and climbing up underneath an underpass. The tornado passed over, and the people emerged a little freaked out but otherwise unscathed. It was quite dramatic.

It was also perhaps the worst thing for auto safety during a tornado.

The 1991 video was unique in that the tornado wasn’t particularly powerful, the underpass was designed with a recessed space at the top of the slope, and not many people were taking shelter. The reality is, most underpasses don’t provide such great protection, create wind tunnels that intensify the tornado’s fury and send more deadly debris through the space, and can only hold so many people.

Since the video, the sight of car occupants stopping their vehicles (and even double and triple parking and blocking driving lanes) at underpasses and hoping to ride out the storm became commonplace. Besides not being the safest place to shelter, this creates a road hazard that can be more dangerous than the tornado that might not even come close to the underpass.

The bottom line: If you are driving and a tornado is in sight, avoid the underpass. Instead:

Tornados are thankfully rare, even in Tornado Alley, but you should know the risks and what to do in case you are caught in the storm. People have died in cars during tornados — not just from the tempest, but because of accidents caused by storm chasers, possibly heavy rain and hail, and frantic drivers. Your safest move is to know what the weather forecast holds and avoid going out if a severe storm is imminent. And above all, don’t stop at an underpass …